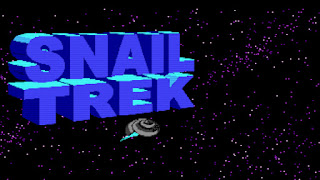 From the opening title, I could tell where this game took at least a certain amount of inspiration. Snail Trek immediately made me think of Space Quest, in the best possible way. Aside from the immediate graphical similarities, it also has it's own quirky and humorous sci-fi setting. But no plucky janitor here, instead you control a team of snails desperately trying to find a new home, with plenty of fresh lettuce.

While it's definitely reminiscent of old Sierra text-parser games, the interface does include an autocomplete option to help out, as well as having a "Maniac Mansion"-style ability to swap between two or more characters. The game is made up of four episodes, which don't take very long to complete. This provides some short, enjoyable experiences that don't outstay their welcome. I think I completed the first three parts in about an hour or so, but the last part was a bit trickier! 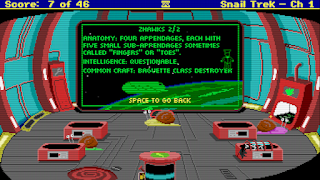 The first episode starts on your spaceship, as you wake from hypersleep to find that the Captain is dead and there's a planet on the scanners that looks positively bountiful with lettuce! Your task then, is to investigate what happened on your ship, and then try and find a place to land so that you can confirm the lettuce planet is habitable.

After this, the adventure truly begins, and each chapter has new and inventive puzzles to solve. Having to switch between the different characters is key, and generally the puzzles are well constructed and with some hints provided for what you should be doing next. 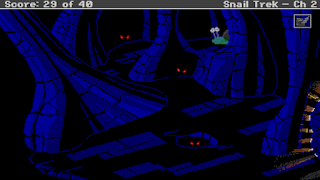 This being a Sierra-style adventure, death is often around every corner, but do not worry! In addition to the relatively short length of these chapters, they also have a good auto-save and I have not found any situations where I got into an unwinnable situation. I would highly recommend trying the first chapter, which is free, and the rest of the game is very cheap too.

I'd also like to thank Mumbles who covered this game as part of her podcast, where she discussed Loom and various other adventure games: http://indieandretro.libsyn.com/website/episode-4-loom
Posted by Andy_Panthro at 13:50